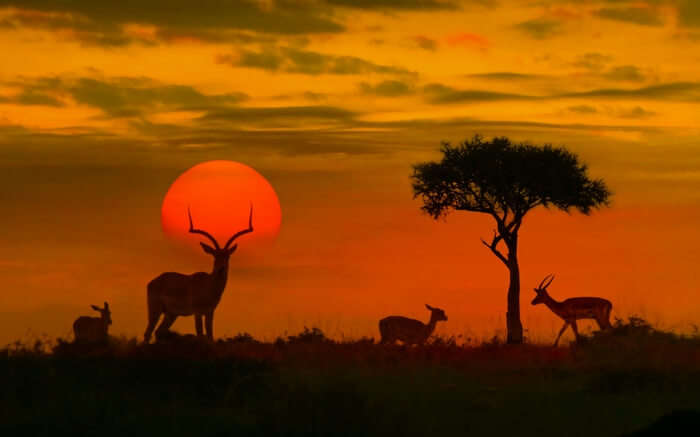 Cape Town is a port city on South Africa’s southwest coast, on a peninsula beneath the imposing Table Mountain. Slowly rotating cable cars climb to the mountain’s flat top, from which there are sweeping views of the city. Johannesburg, South Africa’s biggest city and capital of Gauteng province, began as a 19th-century gold-mining settlement. Its sprawling Soweto township was once home to Nelson Mandela and Desmond Tutu. Mandela’s former residence is now the Mandela House museum. The Pilanesberg Game Reserve is a provincial park in South Africa, northwest of Johannesburg. It’s set in an extinct volcanic crater, with grasslands, wooded valleys and multihued rock formations. Wildlife includes elephants, lions, leopards and rhinos. Animals drink at Mankwe Dam, a man-made lake. Abundant birdlife  includes eagles and ostriches.

Day 1 :
Welcome to South Africa
The South Africa tour starts with your arrival at the Cape Town city where you will meet your travel companion in the International Airport. After meeting and greeting, reach your booked accommodation where you have the day to rest and prepare yourself for the upcoming tour. Overnight In Capetown.
Day 2 :
City Tour Of Capetown
The day tour of Cape Town today will start with a delicious breakfast that will be served at the hotel. Later you will be picked by your driver for the city tour covering up the major attraction. Start with the visit to Table Mountain that offers a panoramic sight of the entire city. Table Mountain as a sandstone bed is known for hiking tour and the flora and fauna conserved in the Table Mountain National Park. Proceed towards the Signal hills near the Table Mountain where you can hike up of the weather permits. Ending up the hiking tour you have the day left to enjoy the scenic drive through the Clifton and the coastline of Cape Town. The rest of the attraction like the Houses of Parliament, company gardens or the city hall can be explored if the time is left for the further excursion. Overnight In Capetown.
Day 3 :
Cape Point Tour
With the morning meals served at your hotel in Cape Town, the day starts. The tour for the day calls for a visit to the Hout Bay where you have time to enjoy the leisure and scenic beauty of the place. Continue your journey to the Cape Point nature reserve and Cape of Good Hope that makes the best tourist attraction in Cape Town. The place is best to get some pictures and wander around the beach. By lunchtime, you will reach the Fish Hoek Galley for lunch. By the end of the day, you will get back to your accommodation. Overnight In Capetown.
Day 4 :
Cape Town- Johannesburg- Pilanesberg
Fill up your stomach with some delicious breakfast and check out from the hotel. Meet our guide who will then transfer you to the airport. From there board your flight to Johannesburg which will take approximately 2 hours. On arrival at Johannesburg, you will be escorted by out representative ho will take you directly to Pilanesberg which is a famous game drive in South Africa. You can rest for a while & by afternoon get ready for your game drive where you will come across the big 5 and other endangered species. With cosy setting and perfect ambience, you will be served delicious dinner making it ideal for your honeymoon tour. Overnight In Pilanesberg.
Day 5 :
Pilanesberg Game Drive
Home to Big 5 animal, Pilanesberg Game drive is one of the famous game reserves in South Africa offering amazing wildlife experience. The best time to view these animals is the time before sunrise where you can spot the predators. Early morning, get yourself ready for morning game drive in Pilanesberg and get a chance to spot the big 5 animals up close and personal. After the morning games drive tour, have your breakfast and rest for the day. Later, get ready for your afternoon game drive tour and explore the park in an open drive vehicle that offers the best vantage view of the park. Overnight In Pilanesberg.
Day 6 :
Transfer to Johannesburg
The leisure tour at Pilanesberg ends with the delicious morning breakfast that is served at the resort. Drive back to the Johannesburg city and get check in to your booked accommodation there. Relaxing for the day, the afternoon calls for a city tour where you will enjoy the games at the famous casino and explore the Emperor’s Palace that is counted as the best attraction there. Get back to the hotel. Overnight In Johannesburg.
Day 7 :
Final Departure
Your entire tour ends here at Johannesburg. Grabbing the morning meal, enjoy the private ride to the airport from where you will catch the flight for onward destination.

When is the best time to go?

Game Viewing: June to October when the vegetation isn’t as thick and game viewing is easier but good all year round at private reserves.
Whale Watching: Mid-June to October (Southern Right Whales) and August to December (Humpback Whales).
Diving (Scuba & Shark Cage diving): April to September
Flowers: August to September
Birding: The palaeoarctic migrants arrive in November and the intra-Africa migrants usually by mid-October.

Is South Africa a good place to take kids?

All major roads and highways in South Africa are excellent and typical of any first-world country. Some of South Africa’s back roads aren’t as well maintained, so care should be taken while driving on them. Driving in South Africa occurs on the left-hand side of the road, and the speed limit is 75 miles per hour. Be on the lookout for animals in the bush and in rural areas.

Will I need a visa?

Canadian and US passport holders do not require a visa for entry to South Africa for a stay of up to 90 days. What is required is a valid passport with a minimum of 2 blank pages and a validity of 6 months past your intended return date from South Africa.

Are the animals dangerous?

During game drives in the bush, predatory animals like lions, leopards, and hyena often come so close to your vehicle that danger would seem imminent. Amazingly, the animals who live in and around the private game reserves are accustomed to the sight and sound of a Land Rover filled with people, and will often appear not even to notice you. However, anything could happen in the wild, so guests are instructed not to stand up in the vehicle or make any sudden movements, and all rangers are trained to handle an attack situation and are armed with loaded shotguns.

The private hospitals in South Africa are some of the best in the world. In fact, doctors at the Groote Schuur Hospital in Cape Town performed the world’s first heart transplant in 1967. Private hospitals are more advanced than public hospitals and tend to be less crowded. Tourists are advised to visit private hospitals in the event of an emergency and are expected to pay cash for medical services rendered.

I hear the seasons are opposite ours, what's the weather like?

The seasons of the southern hemisphere are opposite to those in the northern hemisphere so the summers run from November to February, when most of the country is characterized by hot weather with afternoon thunderstorms. Winters are generally mild and dry. South Africa enjoys one of the world’s highest average daily hours of sunshine – 8.5 compared with 3.8 in London, 6.4 in Rome and 6.9 in New York. South Africa has an average annual rainfall of 464 mm, compared to a world average of 857 mm. In the Western Cape, the average rainfall is highest in the winter months, while in other provinces, the average rainfall is highest during summer. Overall South Africa enjoys a temperate and pleasant climate, with lovely warm sunny days most of the year.

THAILAND 6 Days
৳ 28,999
Phuket, a rainforested, mountainous island in the Andaman Sea, has some of Thailand’s most popular beaches, mainly situated along the clear waters of the western...
View Details
Available through out the year:

Dubai 8 Days
৳ 39,999
Dubai is a city and emirate in the United Arab Emirates known for luxury shopping, ultramodern architecture and a lively nightlife scene.Burj Khalifa, an 830m-tall...
View Details
Available through out the year:

London 8 Days
৳ 59,999
London, the capital of England and the United Kingdom, is a 21st-century city with history stretching back to Roman times. At its centre stand the...
View Details
Available through out the year: