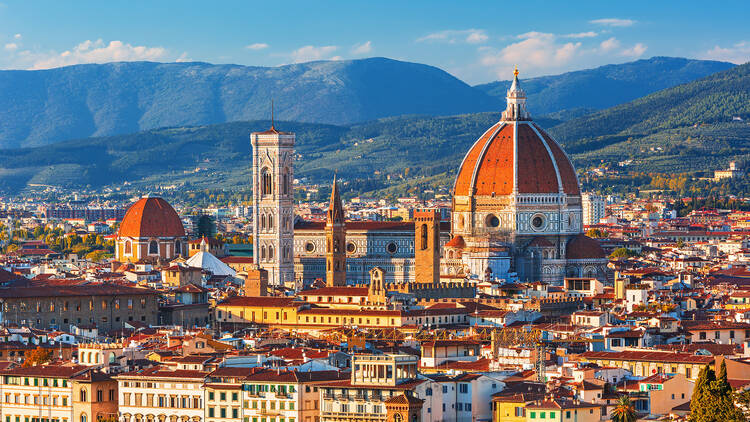 Rome is the capital city of Italy. It is also the capital of the Lazio region, the centre of the Metropolitan City of Rome, and a special comune named  Comune di Roma Capitale. Florence, capital of Italy’s Tuscany region, is home to many masterpieces of Renaissance art and architecture. One of its most iconic sights is the Duomo, a cathedral with a terracotta-tiled dome engineered by Brunelleschi and a bell tower by Giotto. Venice, the capital of northern Italy’s Veneto region, is built on more than 100 small islands in a lagoon in the Adriatic Sea. It has no roads,  just canals – including the Grand Canal thoroughfare – lined with Renaissance and Gothic palaces. The Jungfrau, at 4,158 meters is one of the main summits of the Bernese Alps, located between the northern canton of Bern and the southern canton  of Valais, halfway between Interlaken and Fiesch. Interlaken is a traditional resort town in the mountainous Bernese Oberland region of central Switzerland. Built on a narrow stretch of valley,  between the emerald-colored waters of Lake Thun and Lake Brienz, it has old timber houses and parkland on either side of the Aare River. Titlis is a mountain of the Uri Alps, located on the border between the cantons of Obwalden and Bern. At 3,238 metres above sea level, it is the highest summit of the range north of the Susten Pass, between the Bernese Oberland and Central Switzerland. Paris, France’s capital, is a major European city and a global center for art, fashion, gastronomy and culture. Its 19th-century cityscape is  crisscrossed by wide boulevards and the River Seine. Disneyland Paris is an entertainment resort in Chessy, France, 32 km east of Paris. It encompasses two theme parks, resort hotels, Disney Nature Resorts, a shopping, dining and entertainment complex, and a golf course.

Day 1 :
Welcome to Italy
Upon Arrival in Rome, Meet by our Representative and Transfer to Hotel. Check in hotel. Evening free for shopping and personal activities. Overnight in Rome.
Day 2 :
Rome City Tour
After morning breakfast proceed to visit Vatican Museum,Sistine Chapel and St. Peters Basilica. Then Guided City of Rome. After sightseeing  return back to hotel. Overnight in Rome.
Day 3 :
Rome – Florence – Venice
After breakfast at hotel. Later  proceed towards Venice,travel north and cross the Po River to fabled Verona, setting for Shakespeare’s Romeo & Juliet. Marvel at the ancient Roman Arena, built for gladiator fights but now a popular venue for festivals and concerts; shop in Via Mazzini, or sip local Prosecco, Amarone, or Soave wine in one of the many bars of the center. Overnight stay at Venice.
Day 4 :
Venice Tour
After Breakfast, Check out and Travel to Venice. On arrival proceed for Venice Tronchetto to San Marco  Vaparetto Tickets, Venice Island Guided Walking Tour,  Gondola Ride (30 Mins.)  Venice San Marco to Tronchetto Vaparetto Tickets . Dinner in Indian Restaurant, Overnight in Venice.
Day 5 :
Venice to Interlaken
After breakfast at hotel. Later proceed towards Interlaken. Arrival in Interlaken by train 2nd class from the Swiss border. Overnight in Interlaken.
Day 6 :
Interlaken - Jungfraujoch - Interlaken
This morning depart on an excursion from Interlaken up to Jungfraujoch- Top of Europe. This emorable trip from Interlaken takes you via Lauterbrunnen and Wengen to the Kleine Scheidegg, at the foot of the famous Eiger North Wall. Then ascend by the Jungfrau Railway to the magnificent mountain world of eternal ice and snow, Jungfraujoch-at 3454m, the highest railway station in Europe. Visit the Ice Palace and Sphinx Terraces offering breathtaking views of the Aletsch Glacier, the longest glacier in the Alps. Overnight stay in Interlaken.
Day 7 :
Interlaken – Lucerne
After breakfast check out from hotel and transfer to Lucerne. Evening is free for your own. Overnight stay in hotel.
Day 8 :
Lucerne - Mt. Titlis - Lucerne
Today you have the option of visiting any of the spectacular mountains in the region. Spend the day visiting Mount Titlis, Titlis (also Mount Titlis) is a mountain of the Uri Alps, located on the border between the cantons of Obwalden and Berne. At 3,238 metres above sea level, it is the highest summit of the range north of the Susten Pass, between the Bernese Oberland and Central Switzerland.  Overnight stay in Lucerne.
Day 9 :
Lucerne to Paris
After breakfast at hotel. Later  proceed towards Paris. After verification at France border transfer to Paris hotel. On arrival Check in at hotel. The evening is free at leisure. Spend an evening immersed in a Parisian cabaret with a dinner at the Lido show (optional tour). Enjoy cabaret productions, complete with music and a dazzling light show. Overnight stay at PARIS.
Day 10 :
Guided City Tour Of Paris
Today Proceed For A Guided City Tour Of Paris. Marvel At The Finest Parisian Tourist Attractions, Place Vendôme, Place De L’opéra Garnier, Musée D’orsay, Place De La Concorde, Champs Elysées, One Of The Most Recognised Fashionable Avenues In The World, Arc De Triomphe, Alexander Bridge, Les Invalides And Several Others. Later We Visit The Iconic Eiffel Tower – 3rd Level, And Get A Stunning View Of The City From The Top. With Its Famous Tapering Cast Iron Tip,The Eiffel Tower Is Not Just The Symbol Of Paris But Of All Of France. Later In The Day, Visit Montmartre Known For Its Artist’s History. Take A Funicular To The Top And See The White Domed Basilica Of Sacre-Coeur, A Popular Landmark And The Second Most Visited Monument Of Paris. Overnight In Paris.
Day 11 :
Enjoy Your Fun Filled Day At Euro Disney
This Day Experience A Day Full Of Excitement At This Popular Amusement Park. The Destination To Relax And Enjoy Different Kind Of Thrill Rides And Studio Movies With Your Loved Ones. You May Choose Between Disney Park, Where Fairy Tales Take Flight Across Five Incredible Lands Filled With Classic Attractions, Shows And Street Parades With Disney Characters Or You May Visit The Disney Studios And Be Astounded By The Outstanding Stunt Shows, Watch A Film Being Made And See Real-Life Sets Used For Creating Blockbuster Movies. Overnight In Paris.
Day 12 :
Final Departure
After morning Breakfast, Check out from Hotel and Transfer to Airport for final departure.

SRILANKA 9 Days
৳ 59,999
Colombo is the executive and judicial capital and largest city of Sri Lanka by population. According to the Brookings Institution, Colombo metropolitan area has a...
View Details
Available through out the year:

NEW ZEALAND 9 Days
৳ 59,999
Auckland, based around 2 large harbours, is a major city in the north of New Zealand’s North Island. In the centre, the iconic Sky Tower...
View Details
Available through out the year: