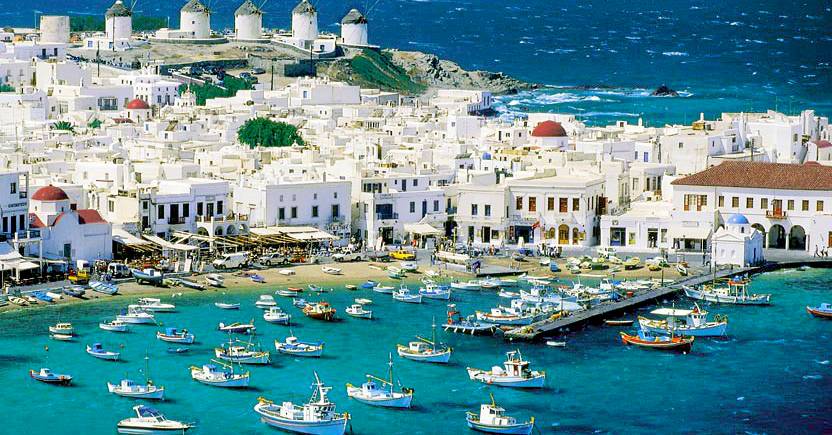 Athens is the capital of Greece. It was also at the heart of Ancient Greece, a powerful civilization and empire. The city is still dominated by 5th-century BC landmarks, including the Acropolis, a hilltop citadel topped with ancient buildings like the colonnaded Parthenon temple. A volcano is a rupture in the crust of a planetary-mass object, such as Earth, that allows hot lava, volcanic ash, and gases to escape from a magma chamber below  the surface. On Earth, volcanoes are most often found where tectonic plates are diverging or converging, and most are found underwater. Santorini is one of the Cyclades islands in the Aegean Sea. It was devastated by a volcanic eruption in the 16th century BC, forever shaping its rugged landscape. The whitewashed, cubiform houses of its 2 principal towns, Fira and Oia, cling to cliffs above an underwater caldera (crater). Istanbul is a major city in Turkey that straddles Europe and Asia across the Bosphorus Strait. Its Old City reflects cultural influences of the many empires that once ruled here.The iconic Byzantine Hagia Sophia features a soaring 6th-century dome and rare Christian mosaics. Cappadocia, a semi-arid region in central Turkey, is known for its distinctive “fairy chimneys,” tall, cone-shaped rock formations clustered in  Monks Valley, Göreme and elsewhere.

Day 1 :
Welcome to Greece
As you arrive in Athens, you will be welcomed by the agent’s representative on the airport who will assist you in your transfers. At the hotel, Check in Hotel Overnight Athens.
Day 2 :
Athens City Tour
Today after breakfast you will proceed for a city tour. You’ll see the Panathenaic Stadium where the first Olympic Games of modern times were held in 1896 (short stop). Continue and pass by the Prime Minister’s residence (Ex Royal Palace) guarded by the Evzones in their colourful uniform, the Temple of Olympian Zeus, the Hadrian’s Arch, the Parliament and the memorial to the Unknown soldier, the Academy, the University, the National Library, The Constitution Square (Syntagma). Arrive in Plaka area and visit the Acropolis museum. Continue and visit the Architectural Masterpieces of Golden Age of Athens: The Propylaea, the Temple of Athena Nike, the Erechtheion and finally “the harmony between material and spirit” , the Monument that “puts order in the mind” , the Parthenon. In the afternoon we suggest you a tour toCapeSounioor shopping inAthensold city, Plaka. Overnight at Hotel
Day 3 :
Transfer to Santorini
This day, after a sumptuous breakfast at the hotel, you will check out and be transferred to the airport for your flight to Santorini. Upon arrival in Santorini, you will be transferred to your new hotel where you can check in and relax for a while. Later in the evening, you can explore the city on your own, have dinner in one of its fine cafes or restaurants and then return to the hotel for a comfortable overnight stay.
Day 4 :
volcano and hot springs Tour
Today after breakfast you will enjoy a Half Day Caldera cruise with the below itinerary. The bus will pick you up from your villages meeting point going to Athinios port! The first stop of the excursion is the volcano of Santorini in Nea Kamen iIsland! There you will have a lifetime experience as you will climb on the top of the volcano, see the active crater and walk on its rims! The second stop is Palia Kameni Island, where you have the opportunity to swim in thehot springsof Caldera created by the volcanos underwater power! Going toThirassiaIslandthe boat sails above underwater craters! InThirassiaIslandyou will have the time to eat in the small traditional taverns,swim in the crystal clear waters and visit the village of Manolason the top of the cliff! After a sailing under the slopes of Oia you will be disembarked at Athinios port, where the buses will be waiting for you and you will be dropped off at the starting meeting point!
Day 5 :
Sentorini to Istanbul
Arrive in Istanbul Ataturk Airport, Meet & greet by an English speaking staff, then transfer to hotel. On arrival check in hotel. Rest of the day is free at leisure. Overnight at Istanbul.
Day 6 :
Istanbul Sightseeing
Post breakfast, enjoy full day tour of Istanbul. Visit Hippodrome, Blue Mosque, Topkapi Palace, Hagia Sophia Museum, Grand Bazaar. After Sightseeing Back to hotel. Overnight stay at Istanbul.
Day 7 :
Istanbul to Cappadocia
Buffet breakfast at hotel. After breakfast proceed to airport, for domestic flight Istanbul to Cappadocia .Receive from airport transfer  to hotel in Cappadocia. Check in hotel. Relax and enjoy your day. Overnight at Cappadocia.
Day 8 :
Cappadocia Sightseeing
Buffet breakfast at hotel. Then proceed to Full day regular (SIC) Cappadocia Tour with Lunch. Visits: Dervent & Pasabag Valleys, Avanos Town,  Goreme Open Air Museum, Uchisar Castle, After sightseeing return back to hotel. Overnight at Cappadocia. Note : Hot air balloon flight We can arrange if guest want (at aditional cost).
Day 9 :
Final Departure
After morning breakfast, checkout from hotel & transfer to airport for final departure. Your wonderful tour to Turkey culminates here.

Dubai 6 Days
৳ 31,999
Dubai is a city and emirate in the United Arab Emirates known for luxury shopping, ultramodern architecture and a lively nightlife scene. Burj Khalifa, an...
View Details
Available through out the year: