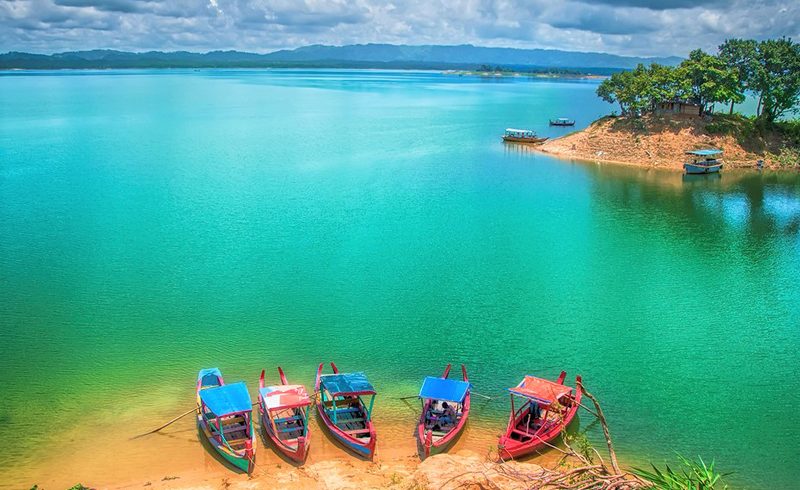 Rangamati is a district in South-eastern Bangladesh. It is a part of the Chittagong Division  and the town of Rangamati  serves as the headquarters of the district. Area-wise, Rangamati is the largest district of the country. Rangamati was a contesting ground for the kings of Tripura  and Arakan. This region came under the Mughal Empire  after the Muslim invasion in 1566. In 1737 Sher Mosta Khan, a tribal leader took refuge with the Mughals. After this the Chakma settlement began along with various other settlements of varying ethnicity. From 1760 to 1761, this land was leased to the East. Bandarban is a district in South-Eastern Bangladesh, and a part of the Chittagong Division. It is one of the three districts that make up the Chittagong Hill Tracts, the others being Rangamati District and Khagrachari District. Bandarban is regarded as one of the most attractive travel destinations in Bangladesh. Bandarban town is the home town of the Bohmong Chief who is the head of the Marma population. It also is the administrative headquarters of Bandarban district, which has turned into one of the most exotic tourist attractions in Bangladesh.

Day 1 :
RANGAMATI- BANDARBAN
Depart Dhaka for Rangamati in the night at 22:00 by AC/ Non AC Bus. Overnight bus journey.Upon arrival in the morning (approx. 07:00) transfer to the hotel group basis. After breakfast board on the boat. Boating through lake till Shuvolong. Back to hotel and after lunch transfer to Bandarban from Rangamati. Upon arrival Bandarban check in the hotel. After dinner free time for personal leisure. Stay overnight Bandarban.
Day 2 :
MEGHLA & NILACHAL
Get up late in the morning. After taking leisurely breakfast you are free till lunch period. After lunch the time is only for sightseeing the points Meghla and Nilachal. Enjoy the panoramic view of sun set from Nilachal back to hotel. Stay Overnight Bandarban.
Day 3 :
SAILOPROPAT, CHIMBUK & NILGIRI
Shortly after sunrise at 05:30 we invite you to explore the most attractive point of Bandarban Nilgiri. Nilgiri is 46 Kilometers away from Bandarban town and about 3500 feet high from the sea level. Visiting Nilgiri come back to Chimbuk Hill. Chimbuk is the third highest mountain in Bangladesh. It is just 26 Kilometer away from Bandarban and is about 2500 feet high above the Sea Level. In a shiny day you can see the shades of clouds over the hill. While back to the hotel stop over at Sailopropat. From Here one can buy some handy craft items from the tribal shop. Back to hotel and check out the room. After lunch free time is for personal shopping.Depart Bandarban for Dhaka in the night at 20:00 by AC/ Non AC Bus. Overnight bus journey.

Bhutan 5 Days
৳ 13,999
Thimphu, Bhutan’s capital, occupies a valley in the country’s western interior. In addition to being the government seat, the city is known for its Buddhist...
View Details
Available through out the year:

Dubai 4 Days
৳ 99,999
Dubai is a city and emirate in the United Arab Emirates known for luxury shopping, ultramodern architecture and a lively nightlife scene. Burj Khalifa, an...
View Details
Available through out the year: