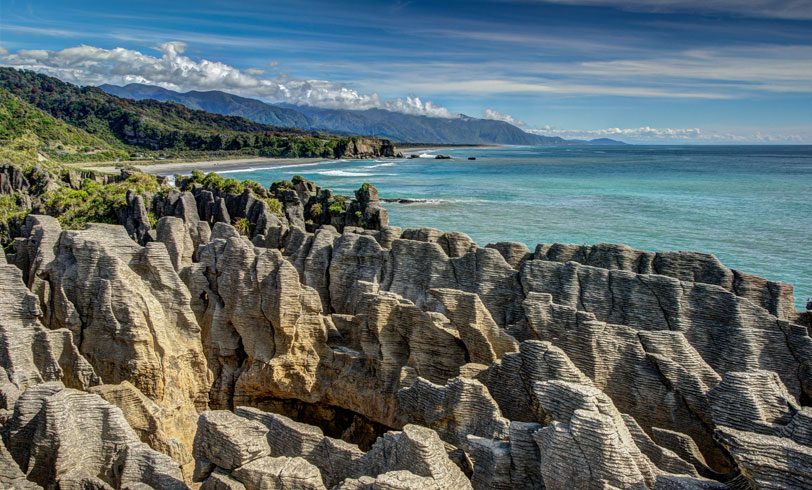 Auckland, based around 2 large harbours, is a major city in the north of New Zealand’s North Island. In the centre, the iconic Sky Tower has views of Viaduct Harbour, which is full of superyachts and lined with bars and cafes. Auckland Domain, the city’s oldest park, is based around an extinct volcano and home to the formal Wintergardens. Near Downtown, Mission Bay Beach has a seaside promenade. Waitomo is a village on the North Island of New Zealand. It’s known for its extensive underground cave systems. Thousands of glow-worms light up the Glowworm Caves. The vast Ruakuri Cave features waterfalls and limestone formations. Rotorua, a town set on its namesake lake on New Zealand’s North Island, is renowned for its geothermal activity and Maori culture. In Te Puia’s Whakarewarewa  Valley, there are bubbling mud pools and the 30m-tall Pohutu Geyser, which erupts many times daily. Queenstown, New Zealand, sits on the shores of the South Island’s Lake Wakatipu, set against the dramatic Southern Alps. Renowned for adventure sports, it’s also a base for exploring the region’s vineyards and historic mining towns. Milford Sound is a fiord in the southwest of New Zealand’s South Island. It’s known for towering Mitre Peak, plus rainforests and waterfalls like Stirling and Bowen falls, which plummet down its sheer sides. The fiord is home to fur seal colonies, penguins and dolphins. Christchurch, known for its English heritage, is located on the east coast of New Zealand’s South Island. Flat-bottomed punts glide on the Avon River, which meanders through the city centre. On its banks are cycling paths, the green expanse of Hagley Park and Christchurch Botanic Gardens.

Day 1 :
Welcome to New Zealand
Welcome in Auckland. On arrival, you will be transfer to your hotel (Check-in time is after 3.00 pm). Overnight stay at Auckland.
Day 2 :
Auckland – Waitomo – Rotorua
After breakfast at hotel. Farewell the ‘City of Sails’ as you travel south through the fertile Waikato region to arrive at Waitomo. Enjoy a guided tour of the world famous Waitomo Glow worm Caves including an underground boat ride viewing the millions of glow worms on the cavern roof. On completion continue over the forested Mamaku Ranges to reach the ‘Thermal City’ of Rotorua. Overnight stay at Rotorua.
Day 3 :
Rotorua Sightseeing
After Breakfast at the hotel, visit Te Puia Thermal Reserve, the Agrodome for a sheep and farm show and Rainbow Springs to view trout and wildlife. This afternoon is at leisure. Overnight stay at Rotorua.
Day 4 :
Rotorua – Queenstown
After morning breakfast drop at Rotorua Airport for flight to Queenstown. On arrival transfer to your hotel. Overnight at Queenstown.
Day 5 :
Milford Sound Experience Tour
Today, after breakfast at the hotel and proceed for day trip to Milford Sound Experience. See the wonders of Mitre Peak, glacier- scarred rock walls and waterfalls that tumble through valleys and crash into the sea far below. Overnight stay at Queenstown.
Day 6 :
Queenstown Sightseeing
Today, after breakfast at the hotel make the best of the Multi-Activity Passes Thrillzone. Queenstown’s ThrillZone theme park offers something for the whole family. Take part in a thrilling 360° Virtual Reality experience on a state-of- the-art simulator; be entertained by 3D movies, multi- sensory effects, and active motion seats in the 12D Motion Theatre; challenge friends or family to a game of Lasertag or Heroblast in the 360° Battleground; or get your adrenaline pumping on a drift kart.Overnight stay at Queenstown.
Day 7 :
Queenstown – Glacier Region
Today, after breakfast at the hotel, start journey past Lakes Wanaka and Hawea before turning into the World Heritage Westland National Park. Continue north to arrive in the Glacier Region where mighty rivers of solid white ice, relics of the world’s last ice age, tumble down the rocky valleys. For self drive clients, entry to the Glacier Hot Pools (Franz Josef) is included. Overnight stay at Glacier Region.
Day 8 :
Glacier Region – Greymouth – Christchurch
Today, after breakfast at the hotel, ascend through lush beech forests past the alpine village of Arthur’s Pass before crossing the spectacular Southern Alps. Travel over the fertile Canterbury Plains to arrive in the ‘garden city’ of Christchurch. Overnight stay at Christchurch.
Day 9 :
Final Departure
Morning breakfast at hotel. Check out from hotel & free time until drop to airport for sweet home.

You can visit New Zealand at any time of the year. Summer and winter temperatures vary by only about 10ºC over most of the country, making New Zealand an ideal
holiday destination all year round.New Zealand has four quite distinct seasons – Spring (September – November), Summer (December – February), Autumn/Fall (March – May)
and Winter (June – August).In summer there’s plenty of sunshine, and activities in and around the water include rafting, snorkelling, diving and kayaking.You’ll find snow on the mountains in winter and excellent skiing. Away from the mountains, New Zealand winters are mild and temperatures generally do not fall below freezing.

New Zealand cities and towns have excellent water supplies and in all cases tap water is fresh and safe to drink. Water from rivers and lakes should be boiled,chemically treated or filtered before drinking to avoid stomach upsets.

RUSSIA 6 Days
৳ 59,999
Moscow, on the Moskva River in western Russia, is the nation’s cosmopolitan capital. In its historic core is the Kremlin, a complex that’s home to...
View Details
Available through out the year:

GREECE 6 Days
৳ 59,999
Athens is the capital of Greece. It was also at the heart of Ancient Greece, a powerful civilization and empire. The city is still dominated...
View Details
Available through out the year: