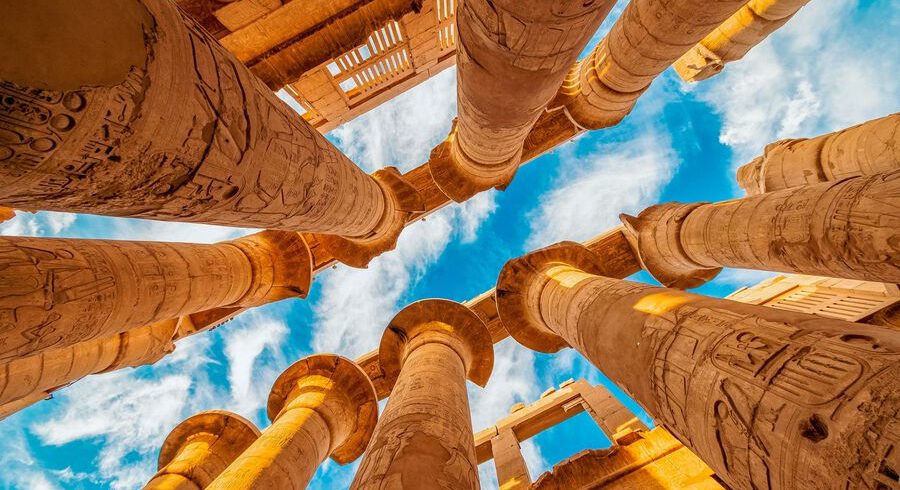 Egypt, a country linking northeast Africa with the Middle East, dates to the time of the pharaohs. Millennia-old monuments sit along the fertile Nile River Valley, including Giza’s colossal Pyramids and Great Sphinx as well as Luxor’s hieroglyph-lined Karnak Temple and Valley of the Kings tombs. The capital, Cairo, is home to Ottoman landmarks like Muhammad Ali Mosque and the Egyptian Museum, a trove of antiquities. Edfu is an Egyptian city, located on the west bank of the Nile River between Esna and Aswan, with a population of approximately sixty thousand people. Edfu is the site of the Ptolemaic Temple of Horus and an ancient settlement, Tell Edfu. About 5 km south of Edfu are remains of ancient pyramids. Luxor is a city on the east bank of the Nile River in southern Egypt. It’s on the site of ancient Thebes, the pharaohs’ capital at the height of their power, during the 16th–11th centuries B.C. Today’s city surrounds 2 huge, surviving ancient monuments: graceful Luxor  Temple and Karnak Temple, a mile north.

Day 1 :
Welcome to Egypt
On arrival you will find your guide waiting for you then you will be transferred to visit the High Dam and the Philae temple. Transfer to the cruise. Boarding before lunch. Lunch on board. Sail to Kom Ombo. Afternoon Tea. Visit the temple shared by the two gods  Sobek and Haroeris. Sail to Edfu. Dinner on board. Overnight in Edfu. Note: Cruise schedules may change due to some sailing reasons. We guarantee that you will do all the mentioned sights, but the order may vary.
Day 2 :
Edfu – Luxor
Breakfast on board. Visit The Temple of Horus in Edfu. Cross the lock. Sail to Luxor. Afternoon Tea. Dinner on board & Galabya party. Overnight in Luxor.
Day 3 :
Luxor West Bank
Breakfast on board. Cross to the West Bank to visit the Valley of Kings; visit the tombs of various Dynasties. King Tut’s tomb is with extra ticket. The Temple of Deir El Bahari of Queen Hatshepsut. On the return journey stop at the Colossi of Memnon which are two gigantic sitting statues representing Amenophis III facing the Nile. Lunch on board. Afternoon free at leisure. Afternoon Tea. Overnight in Luxor.
Day 4 :
Luxor – Departure
Disembarkation. (Optional) Hot Balloon: Should you want to make your stay in Luxor an unforgettable. Drifting peacefully over the Valley of King, Valley of the Queens and the Mountain on the Nobles. The flight is approximately 30:45 minutes depend on the weather Excursion to the Luxor Temple to see its courtyard and the granite statues of Ramses the Great. Proceed to Karnak, which is a serious of temples built in different reigns. Starting by the Avenue of Sphinxes visit the Unfinished Propylon, the Hypostyle Hallwith it’s 134 gigantic columns, the Obelisks of Queen Hatshepsut and Tutomosis III, the temple of Amon adorned with lotus and papyrus designs, the Granite Scarbeus of Amenophis III and the Sacred Lake. Transfer to Luxor Airport for final departure.

MALAYSIA, singapore 7 Days
৳ 45,999
Singapore, officially the Republic of Singapore, is a sovereign island country and city-state in maritime Southeast Asia.The hop-on and hop-off system allows you to tour at...
View Details
Available through out the year:

Dubai 4 Days
৳ 19,999
Dubai is a city and emirate in the United Arab Emirates known for luxury shopping, ultramodern architecture and a lively nightlife scene.Burj Khalifa, an 830m-tall...
View Details
Available through out the year: