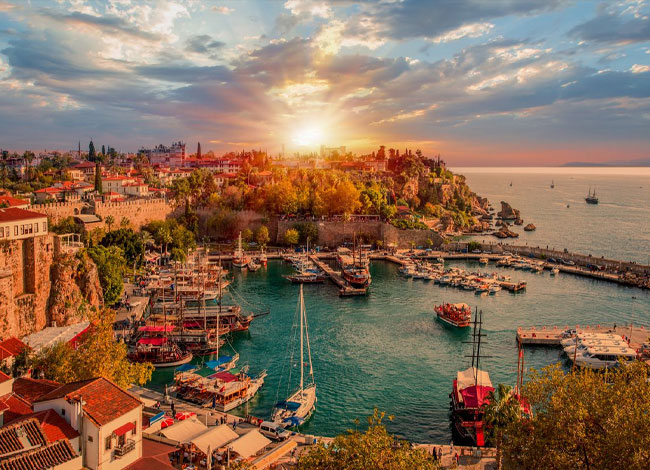 Istanbul is a major city in Turkey that straddles Europe and Asia across the Bosphorus Strait. Its Old City reflects cultural influences of the many empires that once ruled here.The iconic Byzantine Hagia Sophia features a soaring 6th-century dome and rare Christian mosaics. The Bosporus Strait or Bosphorus Strait is a natural strait and an internationally significant waterway located in Istanbul in northwestern Turkey. It forms part of the continental boundary between Asia and Europe. Kuşadası is a beach resort town on Turkey’s western Aegean coast. A jumping-off point for visiting the classical ruins at nearby Ephesus (or Efes), it’s also a major cruise ship destination. Its seafront promenade, marina, and harbor are lined with hotels and restaurants. Ephesus is an ancient city in Turkey’s Central Aegean region, near modern-day Selçuk. Its excavated remains reflect centuries of history, from classical Greece to the Roman Empire – when it was the Mediterranean’s main commercial center – to the spread of Christianity. Pamukkale is a town in western Turkey known for the mineral-rich thermal waters flowing down white travertine terraces on a nearby hillside. It neighbors Hierapolis, an ancient Roman spa city founded around 190 B.C. Cappadocia, a semi-arid region in central Turkey, is known for its distinctive “fairy chimneys,” tall, cone-shaped rock formations clustered in Monks Valley, Göreme and elsewhere.

Day 1 :
Welcome to Istanbul – Bosphorus Dinner Cruise
Arrive in Istanbul Ataturk Airport, Meet & greet by an English speaking staff, then transfer to hotel. On arrival check in hotel. Rest of the day is free at leisure. In the evening you will be picked up for Bosphorus Dinner Cruise Experience a fabulous night of Turkish entertainment on a 3.5-hour night cruise of the Bosphorus Strait. See the palaces of the Ottoman sultans after dark and soak up the views of the European and Asian coastlines. Dine on delicious Turkish cuisine. Overnight at Istanbul.
Day 2 :
Istanbul Local Sightseeing
Post breakfast, enjoy full day tour of Istanbul. Visit Hippodrome, Blue Mosque (Sultan Ahmed Mosque), Topkapi Palace, Hagia Sophia Museum, Grand Bazaar with more than 400 stalls and shops to buy unique Turkish products.. After Sightseeing Back to hotel. Overnight stay at Istanbul.
Day 3 :
Istanbul Two Continents Tour – Kusadasi
After morning breakfast at hotel proceed for Istanbul Two Continents Tour including City Walls, Golden Horn, Spice Bazaar, Beylerbeyi Palace, Asian Continent, Camlica Hill, Bopshorus Bridge. After sightseeing proceed to airport for domestic flight Istanbul to Kusadasi. Receive from airport transfer to hotel in Cappadocia. Check in hotel. Overnight at Kusadasi.
Day 4 :
Kusadasi – Ephesus Tour – Turkish Village Sirince
After breakfast between 08:00 am and 09:30 am pick ups from hotel. Final timing will be given you one day before by your tour consultant. Departure from hotel fully guided tour of Ephesus, ne of the best preserved ancient sites in the world en – route, visiting the Temple of Artemis, Curetes street, famous Roman baths, Celsus Library and Grand theatre. Lunch break around 13:OOpm. After the lunch, we will visit a place which continues to perform one of the oldest arts of Turkey; a carpet weaving centre. After Lunch we will do a Turkish Village Tour. Sirinces construction style today belongs to Anatolian Greeks. The houses on the slope are all Orginal with their white paints. Sirince Village also has a fantastic reputation for making some of the best wines in Turkey – especially fruit wines. We will visit the vineyards and it is time to learn how to make fruit wine with Turkish wine makers. In the evening you will be tested about your knowledge of making fruit wine. On the way we will visit one of the famous leather production centers of the region, where you will have the opportunity to get a good factory rate. On this guided tour, you will avoid the constant nagging and sometimes ‘bullying that is well known in the markets of Turkey. Enabling you to enjoy the shopping experience whilst gaining the knowledge of the ancient craftsmen Overnight in Kusadasi.
Day 5 :
Kusadasi – Pamukkale Tour
At 08:00 we depart for Daily Pamukkale Tour. We will check at the hotel around 12.00 and we have a lunch break until 13.30. Afterwards we shall visit the calcium terraces of Pamukkale (cotton castle) and the ruins of Hierapolis, then walk around this natural phenomenon and have the option of lying in the waters of the natural springs. Overnight in Kusadasi.
Day 6 :
Kusadasi – Izmir to Nevsehir / Kayseri Airport and Cappadocia
After breakfast, we depart for Izmir Airport for our domestic flight to Cappadocia. Transfer from Kayseri airport to your hotel. The rest of the day is yours to explore Cappadocia. Overnight in Cappadocia .
Day 7 :
Cappadocia Tour with Underground City and Goreme Open Air Museum
After breakfast between 08:00 am and 09:30 am pick ups from hotel. Final timing one day before will be given you by your tour consultant.We will drive you to Ozkonak Underground City, one of the best preserved Underground cities in Cappadocia. Than visit to Uchisar Castle, the highest point of Cappadocia. After Uchisar, you visit Goreme Open Air Museum, the Heart of Cappadocia. Goreme Open Air Museum is famous for frescoes dating to 10th century describing the life of Jesus Christ and monks. Next stop is Cavusin, which is an abandoned village with old cave Greek houses. After Cavusin you go to the restaurant in Avanos to have lunch. After lunch, you visit a pottery work shop, to see how to make potteries. Then you go to Love Valley. Love Valley Cappadocia is a hidden valley with scenic formations to say the least. Despite the resemblance to man hood, these amazing rock formations are far from man-made. After Love Valley you visit another workshop to see Cappadocian handwoven carpets and kilims. Next stop is Devrent Valley, which is also called Imagination Valley, where you can see natural rock formations looking like animals. Then you head to a wine shop in Urgup for wine tasting. Last stop is Three Beauties, three beautiful fairy chimneys with their hats, which is the symbol of Cappadocia. This tour will end approximately at 18.00 and you will be returned back to your hotel. Overnight in Cappadocia.
Day 8 :
Cappadocia to Istanbul – End of Tour
After breakfast you will have free time in Cappadocia. Today we depart for Cappadocia Airport for our domestic flight to Istanbul and then back to home. We hope your tour was a memorable one and we would like to see you in the future in one of our tours again. Have a nice trip back home and thanks for choosing us.

TURKEY 7 Days
৳ 52,999
Istanbul is a major city in Turkey that straddles Europe and Asia across the Bosphorus Strait. Its Old City reflects cultural influences of the many...
View Details
Available through out the year: