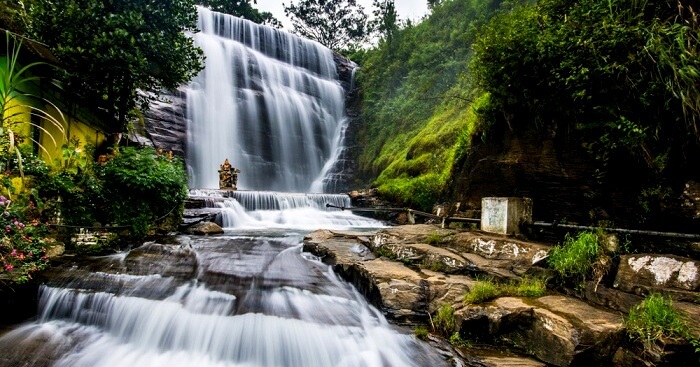 Colombo is the executive and judicial capital and largest city of Sri Lanka by population. According to the Brookings Institution, Colombo metropolitan area has a population of 5.6 million, and 752,993 in the Municipality. It is the financial centre of the island and a tourist destination. Kandy is a large city in central Sri Lanka. It’s set on a plateau surrounded by mountains, which are home to tea plantations and biodiverse rainforest. The city’s heart is scenic Kandy Lake (Bogambara Lake), which is popular for strolling. Nuwara Eliya is a city in the tea country hills of central Sri Lanka. The naturally landscaped Hakgala Botanical Gardens displays roses and tree ferns, and shelters monkeys and blue magpies. Nearby Seetha Amman Temple, a colorful Hindu shrine, is decorated with religious figures. Bentota is a resort town on Sri Lanka’s southwest coast. Its long Bentota Beach stretches north, where it becomes a sandy strip known as Paradise Island, parallel to Bentota Lagoon. Coral-rich dive sites include Canoe Rock. On Bentota River, centuries-old Galapota Temple has a large Buddha statue.

Do I need a visa to travel to Sri Lanka?

A visa is required before entering the country. A 30-day tourist visa can be acquired online for Canadian and American passport holders.

When is the best time to travel to Sri Lanka?

If you’re visiting the west and the beaches on the south coast, the best time to travel is from December to March. The east coast experiences a slightly different weather pattern, so the best time to visit is from April to September. If you plan to go to Yala National Park make sure you avoid September as the park is usually closed for conservation efforts.

Is Sri Lanka a family-friendly destination?

Sri Lanka is family-friendly and considered to be very safe. There are a lot of activities for families such as elephant and leopard safaris in the national parks, visiting pristine beaches, or exploring cultural sites.

What language is spoken in Sri Lanka?

The official languages of Sri Lanka are Sinhala and Tamil.

Is English spoken throughout Sri Lanka?

English is fairly widely spoken throughout the country, however, you shouldn’t assume that everyone can speak the language.

What currency is used in Sri Lanka?

The currency used throughout the country is the Sri Lankan rupee. Mastercard and Visa are widely used where credit cards are accepted as payment.

It is strongly advised not to drink tap water in Sri Lanka. It’s best to stick to treated and filtered water.

SOUTH KOREA 6 Days
৳ 59,999
Incheon, a South Korean city bordering the capital of Seoul, has long been a transportation hub. The ultramodern, massive Incheon International Airport, with railway connections...
View Details
Available through out the year: