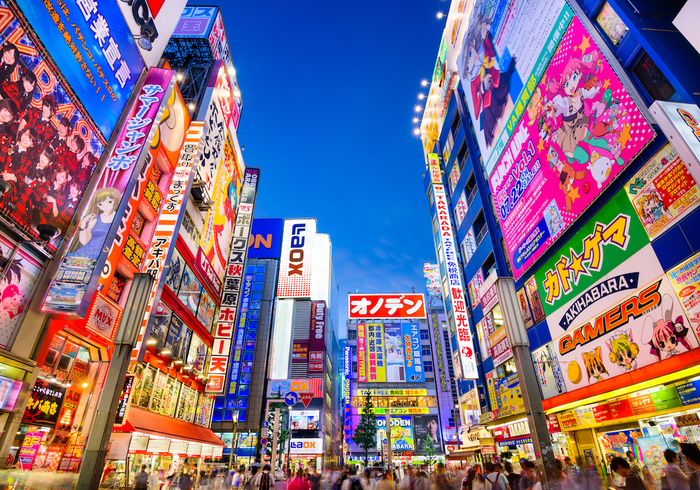 Tokyo, Japan’s busy capital, mixes the ultramodern and the traditional, from neon-lit skyscrapers to historic temples. The opulent Meiji Shinto Shrine is known for its towering gate and surrounding woods. The Imperial Palace sits amid large public gardens. Japan’s Mt. Fuji is an active volcano about 100 kilometers southwest of Tokyo. Commonly called “Fuji-san,” it’s the country’s tallest peak, at 3,776 meters. A pilgrimage site for centuries, it’s considered one of Japan’s 3 sacred mountains, and summit hikes remain a popular activity. Osaka is a designated city in the Kansai region of Honshu in Japan.It is the capital of and most populous city in Osaka Prefecture, and the third most populous city in Japan, following Tokyo and Yokohama. Kyoto, once the capital of Japan, is a city on the island of Honshu. It’s famous for its numerous classical Buddhist temples, as well as gardens,imperial palaces, Shinto shrines and traditional wooden houses.

Day 1 :
Welcome to Japan
After the arrival at the Tokyo airport, on the day one, you would be transferred to the hotel on the seat in Coach Basis from Airport. Once you check in to the hotel, the rest of the day you will spend time relaxing and enjoying nearby places. At the end of the day, you would stay in Tokyo.
Day 2 :
Tokyo City Tour
On the second day of your Japan tour, in the morning, you will have your breakfast at the Hotel and move out for the Tokyo City Tour. For the Tokyo City Tour, you will gather at the designated location from the Hotel by bus on your own. From there, you will be picked by the transport service and dropped at the Bus Terminal. Later, you will visit Meiji Shrine National Diet Building and by drive, you will go to the next destination i.e., East Gardens of the Imperial Palace. After visiting these places, you will also visit Nakamise Shopping Street, Senso-Ji Temple and Ginza. In the evening free time to explore the Hi-Tech city. Overnight at Tokyo.
Day 3 :
Tokyo Sightseeing
Complete your morning breakfast at hotel. You will leave your hotel and gather at the designated location to board a bus for the visit to Mt. Fuji 5th Station and spend around 30 minutes there. After that, you will go sightseeing at Lake Ashi which is known for the presentation of the lake full of Cruises style of ships with a background of Mountain View scenario. Later you will visit Mt. Komagatake for the ropeway trip and depart from Hakone by Bus to return to Tokyo. The tour will disband when you arrive at Ginza in Tokyo. Thereafter, you need to travel on your own to the hotel and overnight stay in Tokyo.
Day 4 :
Tokyo to Osaka by Bullet Train
Complete your morning breakfast at hotel. Checkout from hotel & transfer to Tokyo railway station for Osaka. Board on World’s fastest train. On arrival at Osaka check in hotel. free day for shopping & personal activities. Overnight at Osaka.
Day 5 :
Osaka & Nara Sightseeing
Enjoy breakfast served at the hotel and head out towards the pickup point for the sightseeing adventures scheduled for today. Experience the many beautiful attractions of Osaka & Nara including Osaka Castle, Osaka Castle Park.  In Nara, go to Todaiji temple and the Nara Park to catch a glimpse of the deer roaming about in the wilderness. The last stop would be at Kasuga Taisha, a Shinto shrine. Return to the hotel after an eventful day for an overnight stay.
Day 6 :
Osaka to Kyoto – Kyoto Sightseeing
Complete your morning breakfast at hotel. Checkout from hotel & transfer to Kyoto. On arrival at Kyoto check in hotel & proceed to Kyoto sightseeing including Nijo Castle, Kinkaku-Ji, and the Kyoto Imperial Palace. After sightseeing return to the hotel for an overnight stay.
Day 7 :
Final Departure
After morning Breakfast checkout from hotel & transfer to Tokyo Airport for sweet home.

When is the best time to travel to Japan?

Is Japan a family-friendly destination?

Japan is an incredibly safe and clean country.Japan is fun, fascinating, and safe, making it one of the world’s best destinations for family travel.Whether you’re traveling with young children or teenagers (or both!), Japan’s dynamic and eclectic culture has something for everybody.Activities that the whole family can enjoy include travelling on the bullet train, experiencing Japanese cuisine and even viewing snow monkeys in Yudanaka!

Do I need a Visa to travel to Japan?

A Visa is not required when travelling from Canada or The United States as a tourist for up to 90 days.

What language is spoken in Japan?

The official language of Japan is standard Japanese.But English is taught as a second language in schools. However, do not assume every individual you meet will be able to converse in English. Many signs including the subway systems in Tokyo and Kyoto are in both Japanese and English.

What currency is used in Japan?

The currency used throughout the country is the Japanese yen. Mastercard and Visa are widely used where credit cards are accepted as payment. ATMs are commonplace in Japan.

Is there transportation within Japan?

The most reliable form of transportation within the country is by train as they are highly regarded as being fast, frequent, comfortable and clean.

Nepal 7 Days
৳ 16,999
Kathmandu, Nepal's capital, is set in a valley surrounded by the Himalayan mountains. At the heart of the old city’s mazelike alleys is Durbar Square,which...
View Details
Available through out the year: