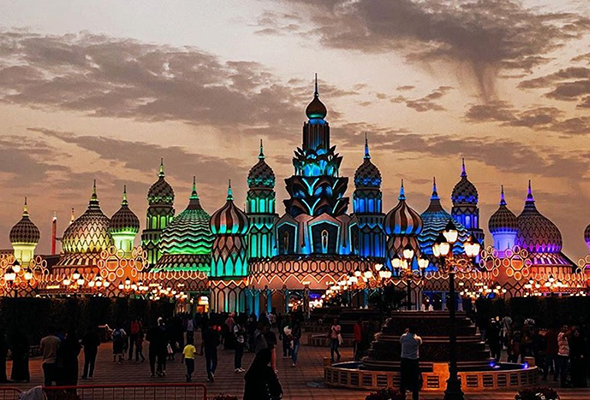 Abu Dhabi, the capital of the United Arab Emirates, sits off the mainland on an island in the Persian (Arabian) Gulf. Its focus on oil exports and commerce is reflected by the skyline’s modern towers and shopping megacenters such as Abu Dhabi and Marina malls.Beneath white-marble domes, the vast Sheikh Zayed Grand Mosque features an immense Persian carpet, crystal chandeliers and capacity for 41,000 worshipers.Dubai has a numerous number of beautiful deserts. Desert Safari Dubai is one of activities that add to the city’s inimitable popularity among tourists from all over the world. Dubai is the most notable feature of its daring desert. There are diverse attempts in this golden land’s golden sands,
ranging from sandboarding and Desert Safari to Camel Trekking.The Dubai Miracle Garden is a flower garden located in the district of Dubailand, Dubai, United Arab Emirates. The garden was launched on Valentine’s Day in 2013. It occupies over 72,000 square metres, making it the world’s largest natural flower garden, featuring over 50 million flowers and 250 million plants.Global village describes the phenomenon of the entire world becoming more interconnected as the result of the propagation of media technologies throughout the world. The term was coined by Canadian media theorist Marshall McLuhan in his books The Gutenberg Galaxy: The Making of Typographic Man and Understanding
Media.

Japan 4 Days
৳ 55,999
Tokyo, Japan’s busy capital, mixes the ultramodern and the traditional, from neon-lit skyscrapers to historic temples. The opulent Meiji Shinto Shrine is known for its...
View Details
Available through out the year:

Japan 7 Days
৳ 89,999
Tokyo, Japan’s busy capital, mixes the ultramodern and the traditional, from neon-lit skyscrapers to historic temples. The opulent Meiji Shinto Shrine is known for its...
View Details
Available through out the year:

Dubai 4 Days
৳ 19,999
Dubai is a city and emirate in the United Arab Emirates known for luxury shopping, ultramodern architecture and a lively nightlife scene.Burj Khalifa, an 830m-tall...
View Details
Available through out the year: