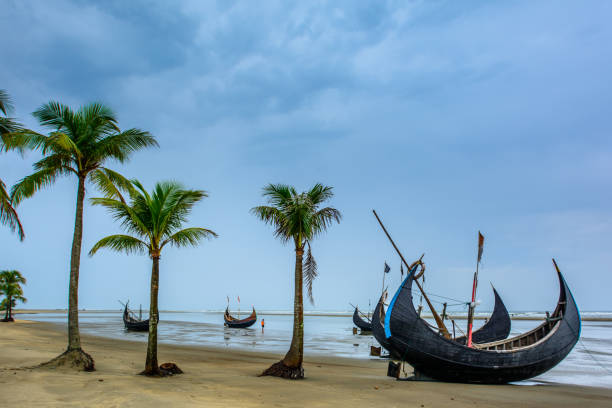 Cox’s Bazar is one of the world’s longest an unbroken 125 km sandy sea beach.It is located 150 km south of the industrial port Chattagram.Cox’s Bazar is also known by the name “Panowa”, whose literal translation means “yellow flower.” Its other old name was “Palongkee”. The modern Cox’s Bazaar derives its name from Captain Hiram Cox (died 1799), an officer of the British East India Company. Cox was appointed Superintendent of Palongkee outpost after Warren Hastings became Governor of Bengal. Captain Cox was specially mobilized to deal with a century-long conflict between Arakan refugees and local Rakhains. He embarked upon the task of rehabilitating refugees in the area and made significant progress. Captain Cox died in 1799 before he could finish his work. To commemorate his role in rehabilitation work, a market was established and named Cox’s Bazar (“Cox’s Market”) after him. Today, Cox’s Bazar is one of the most-visited tourist destinations in Bangladesh, though it is not a major international tourist destination. In 2013, the Bangladesh Government formed the Tourist Police unit to better protect local and foreign tourists, as well as to look after the nature and wildlife in the tourist spots of Cox’s Bazar.

Day 1 :
COX’S BAZAR The Longest Sea Beach
Depart Dhaka for Cox’s Bazar in the night at 22:00 by AC/ Non AC Bus. Overnight bus journey.Upon arrival the wistful destination Cox’s Bazar in the morning (approx. 07:00) transfers to the hotel. Please be noted that international check in time is 14:00. Early check in is subject to availability. After lunch the time is yours. Afternoon is only for the beach activities. Evening is free for shopping. There are many options to buy things like, Dry fish, Handy crafts, Bermis pickle etc. Please don’t forget to take your dinner in time at 20:00! After dinner you are free to make everything on your own. Overnight stay at the hotel.
Day 2 :
INANI & HIMCHORI
Get up late in the morning. Taking breakfast you are suggested to take preparation for afternoon visit. Drive to Inani via Himchori at 15:00 for taking fresh breath to overcome your physical pressure. Bath in the sea at the beach point Inani, where the clean water will charm you to dip yourself with a wave of his nostalgic hand. We will back to the hotel at 19:00. Overnight stay at the hotel.
Day 3 :
FREE FOR PERSONAL ACTIVITIES
This day is only for the personal use. To make the tour memorable tourists can buy things for their love one. This day is full of leisure, time is unlimited till evening. One can pass the whole day by the side of the world longest sea beach or anything else.Depart Cox’s Bazaar for Dhaka in the night at 20:00 by AC/ Non AC Bus. Overnight bus journey.

From ৳ 10
/ Adult
Need help with booking? Send Us A Message

Bhutan 10 Days
৳ 19,999
Thimphu, Bhutan’s capital, occupies a valley in the country’s western interior. In addition to being the government seat, the city is known for its Buddhist sites....
View Details
Available through out the year:

Nepal 7 Days
৳ 19,999
Kathmandu, Nepal's capital, is set in a valley surrounded by the Himalayan mountains. At the heart of the old city’s mazelike alleys is Durbar Square,which...
View Details
Available through out the year:

SWITZERLAND 8 Days
৳ 99,999
Switzerland is a mountainous Central European country, home to numerous lakes, villages and the high peaks of the Alps. Its cities contain medieval quarters, with...
View Details
Available through out the year: