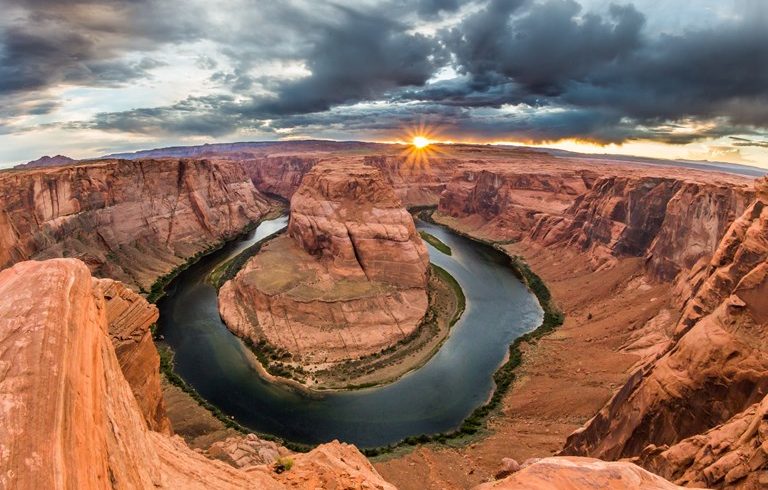 Toronto, the capital of the province of Ontario, is a major Canadian city along Lake Ontario’s northwestern shore. It’s a dynamic metropolis with a core of soaring skyscrapers, all dwarfed by the iconic, free-standing CN Tower. Toronto also has many green spaces, from the orderly oval of Queen’s Park to 400-acre High Park and its trails, sports facilities and zoo. Calgary, a cosmopolitan Alberta city with numerous skyscrapers, owes its rapid growth to its status as the centre of Canada’s oil industry. However, it’s still steeped in the western culture that earned it the nickname “Cowtown,” evident in the Calgary Stampede, its massive July rodeo and festival that grew out of the farming exhibitions once presented here. Banff is a resort town in the province of Alberta, located within Banff National Park. The peaks of Mt. Rundle and Mt. Cascade, part of the Rocky Mountains, dominate its skyline. On Banff Avenue, the main thoroughfare, boutiques and restaurants mix with château-style hotels and souvenir shops. Kamloops is a Canadian city in British Columbia, where the North and South Thompson rivers meet. Sun Peaks Resort’s hiking trails, bike park and numerous ski runs lie to the northeast. Cougars and bears inhabit the British Columbia Wildlife Park east of town.

Day 1 :
Wecome to Canada - Calgary
Welcome to Canada! On arrival at Calgary Airport, you will be met and transferred to your hotel. The evening is free at leisure. Overnight stay at Calgary.
Day 2 :
Calgary – Banff National Park
The discovery of oil converted this ranching town into a sophisticated city. It is also home to the world-famous Calgary Stampede. Tour many of the city’s attractions, including Canada Olympic Park and the Saddledome. Motor west through the foothills and into Banff National Park, gateway to the majestic Canadian Rockies. An orientation tour includes Banff’s unspoiled beauty. Overnight stay at Banff National Park.
Day 3 :
Banff National Park
Banff is one of Canada’s favorite year-round resorts, with summer activities such as hiking, boating, and fishing. With a free day, your Tour Director will suggest an optional helicopter ride over the Canadian Rockies. Overnight stay at Banff National Park.
Day 4 :
Banff National Park – Lake Louise – Columbia Icefield – Jasper National Park
Enjoy a day of scenic grandeur. First stop is Lake Louise, whose turquoise waters create a natural mirror that reflects the surroundings. Up next: a stop at the Columbia Icefield to experience the Ice Explorer, an all-terrain vehicle that travels on ice measuring 750 feet thick. Then, journey north into Jasper National Park, where precipitous gorges, snowcapped summits, and lakes of exquisite blues and greens come into view as the motorcoach scales three mountain passes. Later, your Tour Director suggests an optional float trip down the Athabasca River. Enjoy an orientation tour of Jasper townsite upon arrival. Overnight stay at Jasper National Park.
Day 5 :
Jasper National Park
Today, join our optional excursion to Maligne Lake and Spirit Island, where you embark on a narrated cruise of the lake. The balance of the day is free to enjoy everything Jasper has to offer-from guided hikes and quaint shops to meandering wildlife. Overnight stay at Jasper National Park.
Day 6 :
Jasper National Park – Mount Robson – Kamloops
Depart Jasper and follow the Fraser River to the base of Mount Robson, the highest peak in the Canadian Rockies. The Yellow head Highway continues south along the mighty Thompson River, with spectacular views of the Monashee Mountains. Overnight stay at Kamloops.
Day 7 :
Kamloops – Ferry Crossing –  Victoria
As you travel through British Columbia’s Coast Mountain Range to its majestic Pacific coastline, the vegetation changes from desert landscape to lush alpine forest. Board your ferry for the spectacular crossing to Vancouver Island. Sightseeing in Victoria includes world-famous Butchart Gardens, the Inner Harbour, Bastion Square, and Thunderbird Park.This evening, consider a stroll along the lively Waterfront Promenade. Overnight stay at Victoria.
Day 8 :
Victoria-Gulf Island
Today is free to explore on your own. You may choose to join an optional wildlife and whale watching trip cruising the beautiful waters of the San Juan and Gulf Islands, looking for whales, porpoises, seals, and eagles. Your Tour Director will have ideas for enjoying this most British of Canadian cities. Overnight stay at Victoria.
Day 9 :
Victoria –  Ferry Crossing – Vancouver
This morning, set sail across the Strait of Georgia and through the spectacular Gulf Islands. In Vancouver, city sightseeing includes Stanley Park, Gastown, Chinatown, and other famous landmarks. The remainder of the day is free to explore Robson Street and experience British Columbia’s premier shopping and entertainment location. Overnight stay at Vancouver.
Day 10 :
Final Departure
Your entire tour ends here. Grabbing the morning meal, enjoy the private ride to the airport from where you will catch the flight for onward destination.

Is Canada a family friendly destination?

Is there transportation within Canada?

Canada’s transportation network makes traveling easy. Whether you’re riding in one of buses or on the tube (which is the subway),Canada is incredibly well connected via public transportation. Travel by train to explore the countryside, or consider a car rental to explore the country at your own pace. One important note to keep in mind if you are renting a car to drive around in Canada, the steering wheel is on the right side and cars drive on the left side of the road.

Canada offers a wide range of accommodation options from top-class hotels, exclusive lodges, motels, guest houses, and farm or homestays to holiday parks and
backpacker hostels.You might also like the freedom to discover Canada at your own pace in a campervan. Two, four or six berth vans are available to rent, offering all the comforts of home including a shower, refrigerator and microwave.

Is it safe to drink the water in Canada?

Canada cities and towns have excellent water supplies and in all cases tap water is fresh and safe to drink. Water from rivers and lakes should be boiled, chemically treated or filtered before drinking to avoid stomach upsets.

Do I need a passport or visa to enter Canada?

All visitors to Canada must carry a passport that is valid for at least three months beyond the date you intend to leave the country.Most visitors who intend to stay for less than three months do not require a visa. If you want to stay longer than three months, or your country of origin does not have a visa waiver agreement
with Canada, then you will need to apply for a Visitor’s Visa.

Bali 6 Days
৳ 19,999
Bali is a province of Indonesia and the westernmost of the Lesser Sunda Islands. East of Java and west of Lombok, the province includes the...
View Details
Available through out the year:

EGYPT 7 Days
৳ 28,000
Alexandria is a Mediterranean port city in Egypt. During the Hellenistic period, it was home to a lighthouse ranking among the Seven Wonders of the...
View Details
Available through out the year: